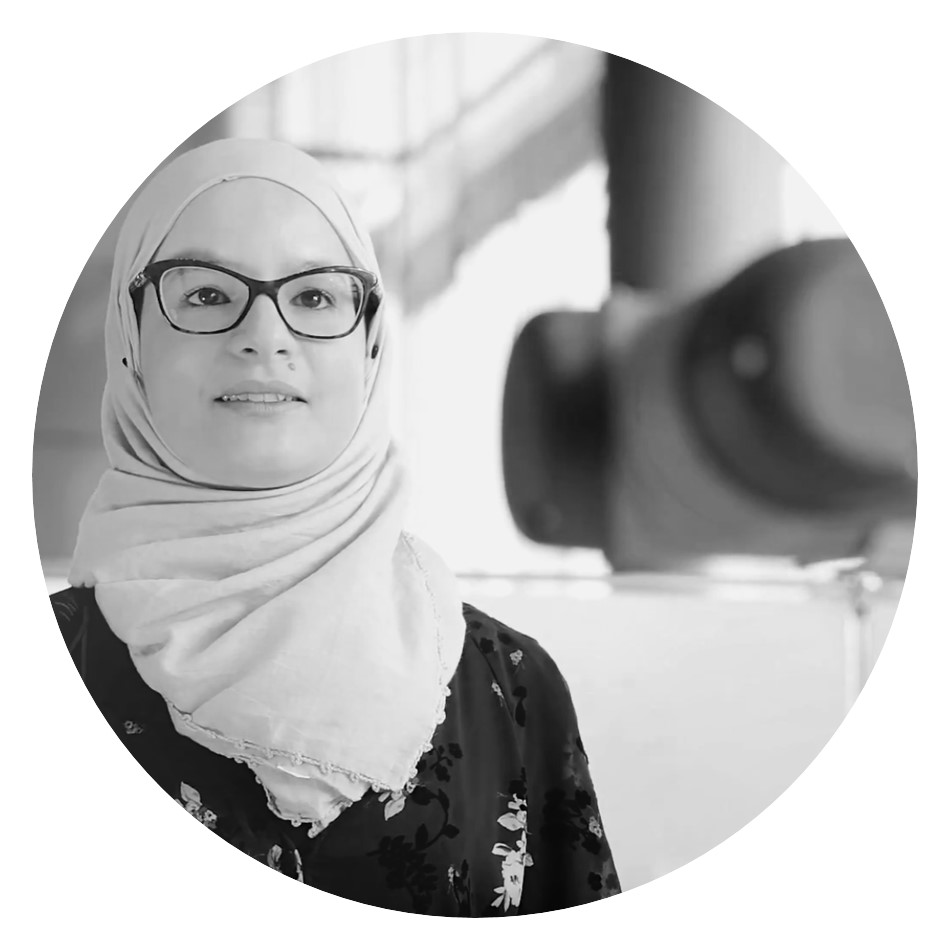 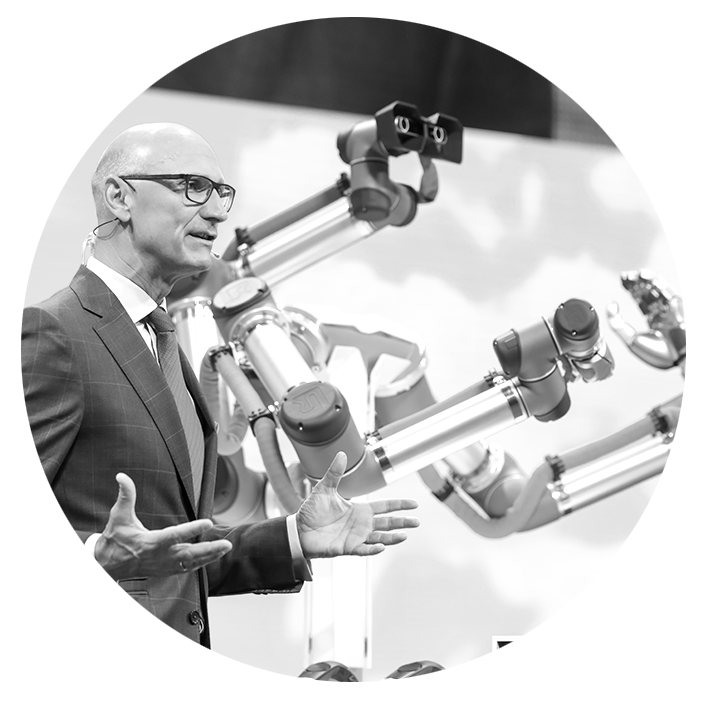 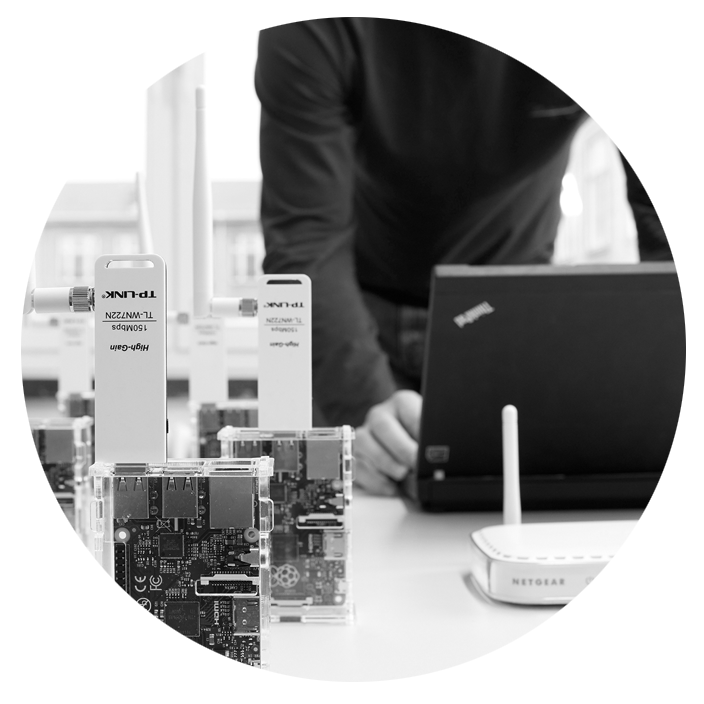 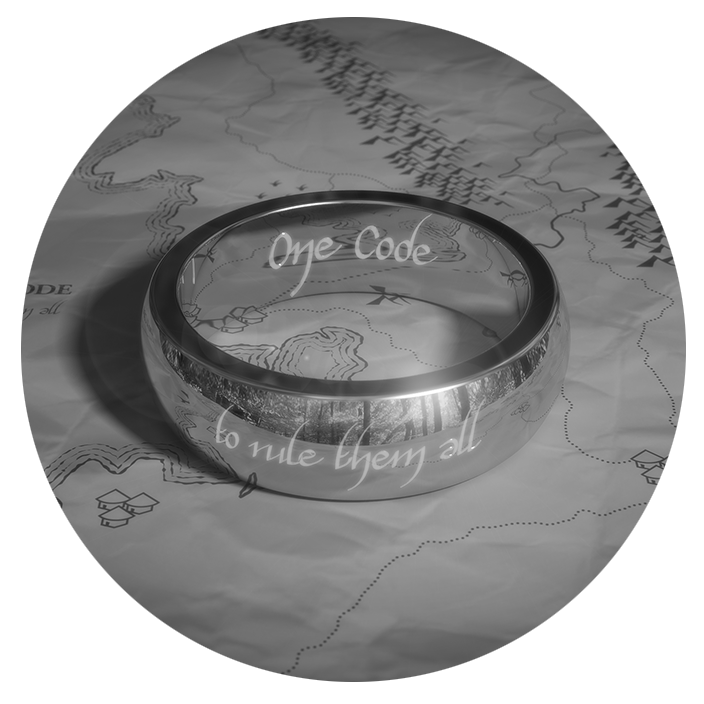 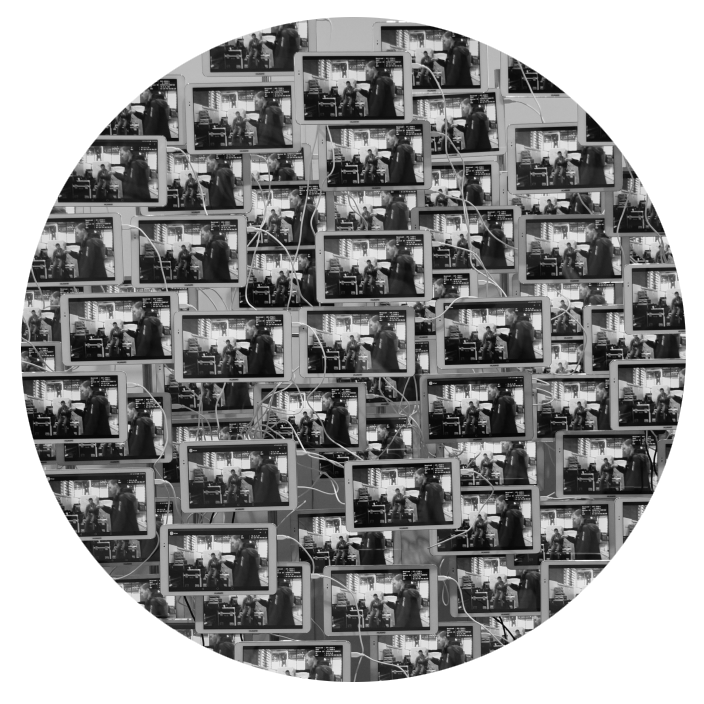 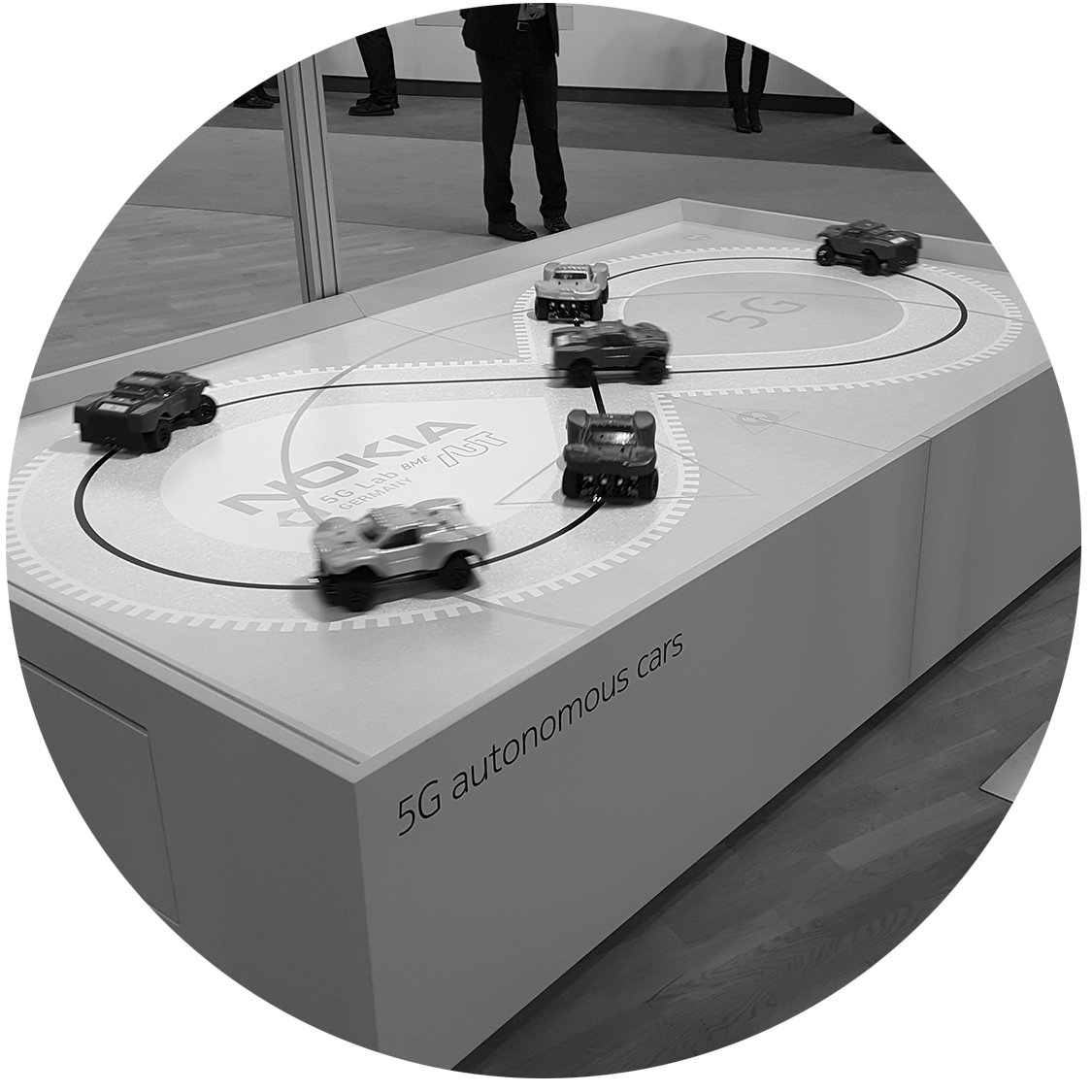 
Communication networks are always built to serve the people for their given needs. Currently, communication networks need to provide low latency, resilience, security and not just bare throughput. Our research philosophy can be described as “Theory that matters!”. Theoretical fundamental research results are tested using different approaches such as simulations, software in the loop, hardware in the loop, and testbeds. Importantly, implementations are not merely used to show feasibility, but rather to derive further relevant research questions by exposing theory to the real world. We apply this philosophy to the following research areas:

The research and standardisation of 5G is going to reach its end and 5G communication systems are currently under actual deployment. Because of that, the scientific research of our group, in close contact with industrial communities of both Germany and the EU, has already started focusing on the future 6G communication networks, which is expected to be ready for deployment from 2030. In respect of 5G, 6G will deal with the orchestration of a fully softwarized network continuum, consisting of collaborative microservices and intelligent agents working in virtual chains. Additionally, 6G will employ a three-dimensional infrastructure, in which the terrestrial network will seamlessly work with aerial vehicles, high-altitude platforms, and constellations of satellites. Next, in order to capture local and specialized network and sub-network needs, 6G network-of-networks will cover multiple scales of – physical and virtual – networks. The evolution of private and 5G non-public network (NPN), such as campus networks, will expand to support many machines and process with strict requirements on Quality-of-Service (QoS) and connectivity, employing edge processing for further automation. 6G will also enable a future network in which end-users‘ experience is enriched by the seamless unification of the physical, digital and human worlds achieved through the new ecosystem of networks, sub-networks and device technologies mentioned above. This means that augmented and virtual reality will play a pivotal role towards the haptic and audiovisual interaction with complex digital twins. Finally, the massive and new role of AI. In-network intelligence will be used for any aspects of management and operations, also towards the realisation of the so-called anticipatory networking based on prediction. This paradigm will be pivotal to reduce the latency below the envisioned thresholds.

Currently we witness a paradigm shift from store and forward (dumb) communication networks to compute and forward (intelligent) communication networks. Computing is now an essential part of every communication node and not only at the end points of communication links. Network operators benefit by lower CAPEX and OPEX, researchers have now a swift way to integrate their ideas and innovation. Main building blocks here are Software Defined Networks and Radio (SDN and SDR), Network Function Virtualisation (NFV), and Information-Centric Networks (ICN). ComNets contributed with their own network emulator ComNets Emu.

The Tactile Internet enables humans to interact in quasi real-time with cyber-physical systems (CPS) in the real or virtual world over intelligent wide-area communication networks. Such advances go far beyond the current state-of-the-art approaches in computer and engineering sciences: intelligent communication networks and adaptive CPS for quasi real-time co-operations with humans require online mutual learning mechanisms, which are crucial challenges. To tackle these challenges, CeTI will conduct unique interdisciplinary research and will address major open research topics in key areas of the complexity of human control in the human–machine loop, sensor and actuator technologies, software and hardware designs, and the communication networks as the basis for several novel use cases grouped in medicine, industry, and the Internet of Skills.

The evolution of classical communication technologies is experiencing an intrinsic limitation of the capabilities due to the trade-offs implied by the established key performance indicators. Then, new different communication resources should be researched to go beyond such limitations in order to achieve the 6G and beyond requirements. Our research focuses on studying, designing, and evaluating the employment of quantum-mechanical technologies in future 6G and beyond communication networks. By exploiting quantum coherence and entanglement as communication and computing resources, future classical-quantum communication networks can achieve performances that classical communications could not have achieved, mainly in terms of security, throughput, latency, and energy efficiency. Our scientific investigation involves quantum error correction, quantum networking, quantum randomness for 6G and beyond, and evaluation of quantum communications via classical simulation-emulation platforms. The work also involves the research on how quantum resources can be beneficial for the different use cases of 6G networks, for industry, health, and the Internet of Things.

Cooperation techniques are a powerful tool to boost the performance in communication networks such as relaying, wireless mesh, virtual antenna fields, etc. We are interested in basic rules of cooperation and adopt those mechanisms to communication networks. Besides the well-known wireless mesh networks, we have carried out research in the field of mobile clouds enabling wireless devices to share physical resources.

The research fields are supported by the following disruptive approaches:

For more than a decade we have been working on network coding, which is a versatile coding technique for upcoming dynamic transport and cloud architectures. It is a magic juice for wireless mesh, distributed storage, multipath communication, peer-to-peer networks, and many more. Several testbeds and demonstrators have been built to show the benefits of network coding over the old generation of static end to end codes. We are proud to have our own teaching module solely on network coding together with Professor Jorswieck from TUD and occasionally hold tutorials at ICC with Professor Muriel Medard from MIT.

Compressed sensing is the theory that breaks with the Shannon-Nyquist sampling rates and advocates for signal reconstructions from far fewer samples, by solving sparse under-determined systems under certain conditions. Our vision does not emphasize compressed sensing as a signal processing toolkit but rather an intelligent enabler to reduce the massive amount of data transmissions, especially in wireless sensor networks. Sparsity and incoherence are its crux, and this is guaranteed by the temporal and spatial correlations found by default in such networks.

Since current communication methods are getting closer and closer to the theoretical limit postulated by Claude Shannon 70 years ago, new avenues of research are necessary to find ways to still the demand for even more connectivity in the future. While Shannon considered the goal of any communication to be irrelevant to the underlying engineering task, information theorists have found the opposite to be true. While any communication goal can be achieved using Shannon’s understanding of communication, certain goals can be achieved by transmitting significantly less data than Shannon’s theory demands, thus going beyond Shannon’s limit in a manner of speaking. Post-Shannon theory thus considers goal-oriented communication, which allows for drastic improvements over traditional communication methods by exploiting knowledge of the goal of the communication, and utilisation of previously useless resources like common randomness and noiseless feedback to increase the channel capacity.

Prominent examples of communication goals with significant proven gains over Shannon’s view include identification via channels and common randomness generation. In identification, the goal of the communication is for the receiver to verify in a binary hypothesis test whether the transmitter sent a specific identity or not. This is, for example, of interest in massive machine-type communications and digital twin applications. Common randomness generation allows for two parties to agree on a certain amount of random data by transmitting less data than finally agreed upon. Common randomness is of special interest for security applications and significantly increases identification capacity.

Rising amounts of data sources and traffic require automation in every aspect of the underlying transport network. Machine Learning can answer decision and optimization problems found in many fields by making use of patterns in the data flows. Provisioning of networks and deploying functionality within the network can be automated in softwareized networks to adapt to requirements in a timely manner.
Collaboration

In most of the aforementioned research topics, we collaborate with Massachusetts Institute of Technology (MIT), Aalborg University (AAU), and Budapest University of Technology and Economics (BUTE). Several projects are carried out with our partners from acticom GmbH, Chocolate Cloud ApS, O&O Software, Steinwurf ApS, Meshmerize, and Wandelbots.